DAY 1:
Departure from Böblingen, Panzerkaserne PX parking lot at 5:00 am. Departure from Ramstein Autohof, bus parking lot (€ 5 parking fee/day) at 06:00 am. Departure from Kaiserslautern, Daennerplatz (opposite Kleber Kaserne) at 6:30 am. Departure from Wiesbaden Hainerberg, bus stop (Washington street, corner J.F. Kennedy Str.) at 7:45 am. Daytime travel to Germany’s great capital, Berlin, with a lunch break en route. Afternoon arrival. We begin our sightseeing tour near the Kaiser Wilhelm Memorial Church. We will see the Brandenburg gate and travel along Berlin’s grand shopping avenue “Ku Damm". We will see the Holocaust Memorial, the area of Hitler’s bunker, the Potsdamer square, the Reichstag - the German Parliament - and the Spree River, where so many tried to swim to freedom. We will see the East Wall Gallery, a 1,3 km long painted stretch of the former Berlin Wall and will stop at the well-known “Checkpoint Charlie”. Afterwards we will check in to our downtown 4 star Hotel. Stroll down the famous boulevard "Unter den Linden", Berlin’s most popular street, giving you a taste of the excitement of this city with glamorous shops and pubs. Your guide will make suggestions for dinner and evening activities.

DAY 2:
After buffet breakfast (included) in the hotel, we drive to Potsdam, the capital of the state Brandenburg with a visit of the Palace Sanssouci (entry extra) of the Prussian Emporer Friedrich Wilhelm the Great and Cecilienhof, where the historical conference of Potsdam with Churchill, Stalin and President Truman took place (entry extra). Afterwards we will make a stop at the “Glienicker Brücke”, a bridge which was used to exchange captured spies during the times of the cold war and therefore was called “Bridge of Spies”! The afternoon is free for own activities or visit the “The Wall Museum” near Checkpoint Charlie (entry extra).

DAY 3:
After buffet breakfast (included) in the hotel and check out, free time for shopping and lunch before we depart. Return journey to points of origin with dinner stop en route. Late evening arrival. 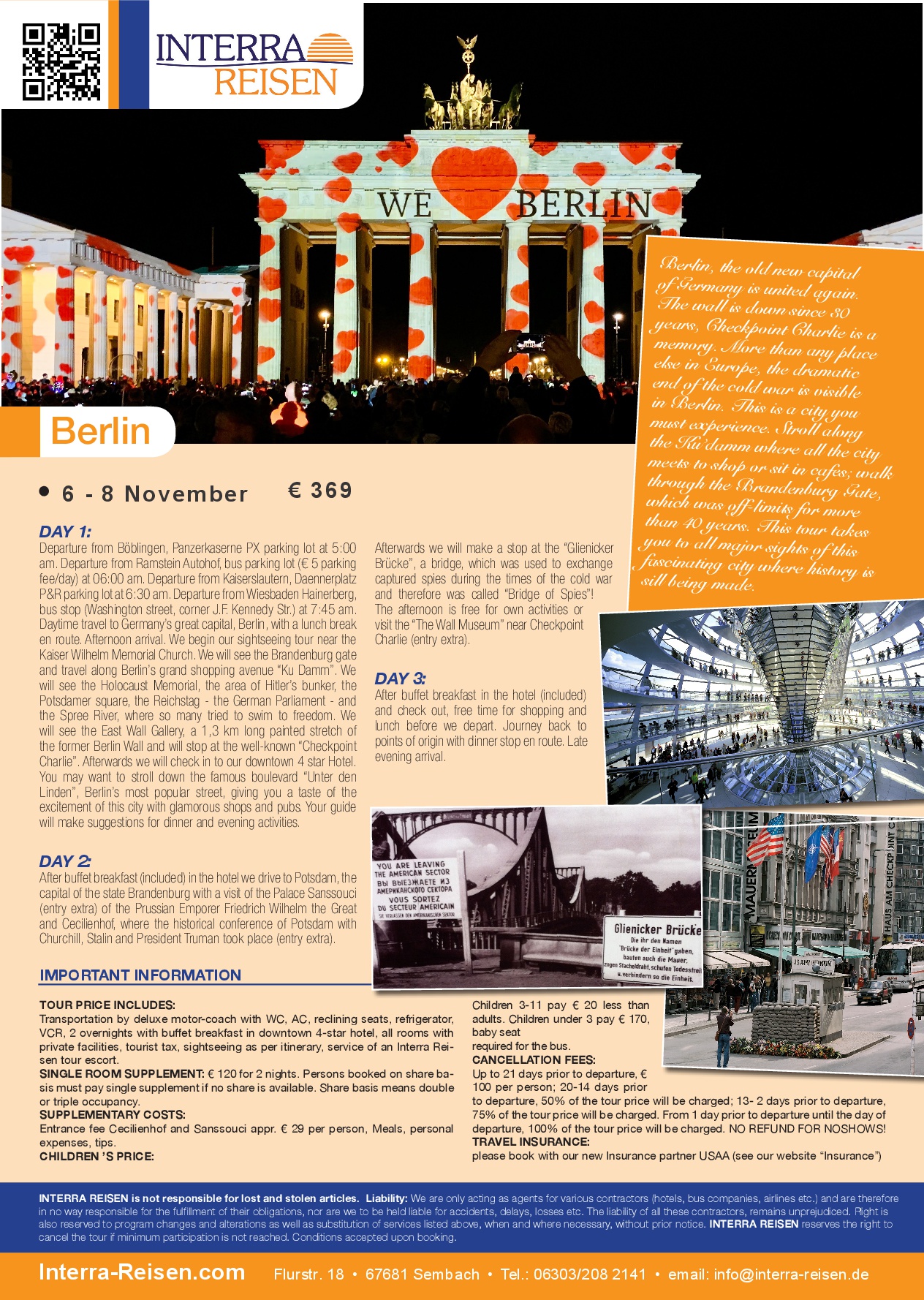