1st Day:  After check in at the International Airport of Frankfurt, Terminal 1, meet with your Interra Reisen escort at 2:30pm. Flight to Bejing with Lufthansa (05:10pm;17:10h).

2nd Day: Morning arrival in Beijing (appr. 09:30h; 09:30am), where our local guide will be waiting for us. After sightseeing we visit the Summer Palace, built for Empress Cixi in the 1880s. The palace and its grounds cover an area over 700 acres of landscaped park, with temples and pavilions, a theatre, bridges and fountains. Stroll around and don’t miss the covered walkway, curving for over 800 yards and painted with scenes of southern China. Lunch in a restaurant. In the afternoon we check into our 4-star hotel.

3rd Day:  After breakfast enjoy the city sightseeing tour and see the Forbidden City, which got it’s name from forbidding ordinary people in this area for over 500 years. The last emperor and his court continued to live in its palaces after the 1911 revolution. Supposedly, there is a total of 9,999 rooms. From here we proceed to one of the world’s largest urban spaces: Tiananmen Square and then we visit the Temple of Heaven, where the emperor would come to pray and make sacrifices for good harvest. After dinner join us for an unique experience to the Chinese Opera, a vivid spectacle of gorgeous costumes, make-up, dance and battle scenes.

4th Day:  After breakfast prepare yourself to climb the steps of the over 5,000 km long Great Wall! From here we pay a visit to the Ming Tombs. After we returned back to our hotel we will have a special Chinese dinner with Peking duck.

5th Day:  After breakfast and check out, we depart to the airport and fly to Xi’an. After arrival and a sightseeing tour of the city we will see the walls dating from early in the Ming Dynasty, around 1370. Outside the walls the Small Wild Goose Pagoda dates from the late 7th century. It is part of a still-active Buddhist Jianfu temple. Every morning the monks toll a huge iron bell, which resounds over a large part of the city Xi’an. Afterwards we visit the Residence of the family Gao and enjoy a Chinese Shadow Theatre. We then take a stroll in the Muslim Quarter, where some 25,000 people of the Hui minority live. Hotel check in and dinner in a restaurant.

6th Day:  Happy Thanksgiving! After breakfast we start with our excursion to the Terracotta Warriors. Within two years, three huge pits had been uncovered, containing more than 7000 figures of warriors, just over life-size, with hundreds of horses, generally in line of four, interspersed among them. Lunch in a restaurant. After this excursion we fly from Xi’an to Shanghai. From the Airport Pudong we will “fly” with the magnetic train Transrapid to Shanghai. Transfer to our hotel and check in.

7th Day:  After breakfast in the hotel we start with the city sightseeing tour. We will see the Yuyuan Garden, a classical Chinese garden of pools, bridges, etc, dating from 16thcentury. Then we visit the Old City and Jade Buddha Temple, with its life-sized Buddha carved from a single piece of precious white jade followed by a Harbour boat ride (appr. 1 hour) and a walk through the little streets of Tianzifang. Lunch in a restaurant. In the evening we will visit a famous Acrobat Show.

8th Day: After breakfast we visit the water village of Zhujiajiao including a short boat tour. We then pay a visit to the Jin Mao Tower. We drive with an elevator up to the 88thfloor in only 45 seconds. At the highest observation deck in China we can enjoy a spectacular view of Shanghai. Inside the building you can look down to the lobby of the Grand Hyatt Hotel at the 53rd floor. Afterwards free time for shopping and lunch in a restaurant.

9th Day:  After breakfast, we check out and depart for the Airport of Shanghai. Our Lufthansa air craft leaves in the early afternoon (1:50pm; 13:50h) and arrives at Frankfurt Airport at appr. 7:00pm; 19:00h. 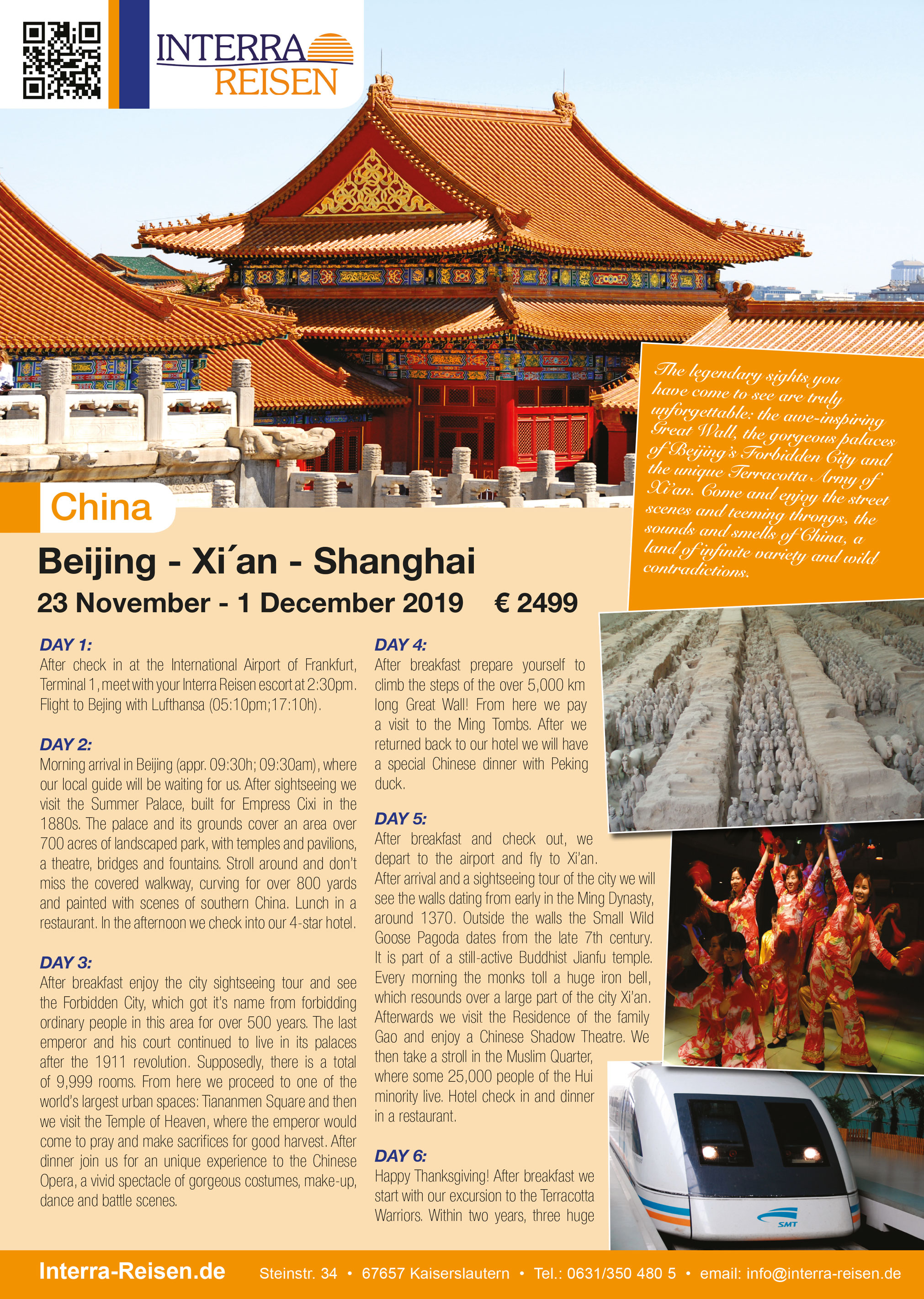